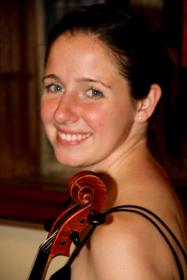 Dr. Courtney Grant serves as a Lecturer of Music at Mississippi State University, where she teaches violin, viola, aural theory, and is one of the conductors of the Philharmonia.

As an orchestral musician Dr. Grant performs with many orchestras including the Meridian Symphony, Gulf Coast Symphony, Pensacola Symphony, Tuscaloosa Symphony, Mississippi Symphony, and Mobile Symphony. Previously she has also played with the Lancaster Symphony, Pottstown Symphony, Washington Korean Symphony Orchestra, and has served as principal violist for the Trinity Chamber Orchestra in Washington, D.C. While playing with the Trinity Chamber Orchestra she appeared as a soloist performing Max Bruch's Romanze for Viola and Orchestra. In addition she has performed at the Endless Mountain Music Festival and the Masterworks Music Festival.

As a chamber musician Dr. Grant has been a founding member of the Graduate String Quartet at the University of Delaware, Black Cat String Trio, and Riverside Quartet. Additionally she has played with the Graduate String Quartet at West Virginia University who competed at the National Level of the MTNA Chamber Music Competition in 2014. In 2015 Dr. Grant and her husband, percussionist Kristopher Grant, formed the Sonorous Duo. They are committed to expanding the repertoire for the combination of viola and marimba by commissioning a wide variety of composers as well as performing for audiences worldwide.