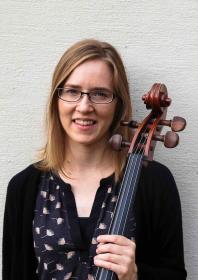 Alisha Rufty is a DMA candidate at the University of Memphis, where she also holds a Master of Music degree in Cello Performance. Other degrees include a Bachelor’s in Music Education from Florida State University, as well as a Performance Certificate from Penn State. Ms. Rufty’s major teachers include Lubomir Georgiev, Leo Altino, Kim Cook, Mihai Tetel and Dr. Kimberly Patterson.

Ms. Rufty was formerly the orchestra director at both Houston and Collierville High Schools in the Memphis area.  Both schools received superior ratings at regional adjudications under her direction.

Ms. Rufty is currently the principal cellist for the Starkville Symphony Orchestra at Mississippi State, where she is also the lower strings instructor and co-director of the MSU Philharmonia.  As an active free-lance musician, Ms. Rufty performs in various groups in the tri-state area such as the Memphis Symphony, Northern Mississippi Orchestra, and the Tuscaloosa Symphony Orchestra.   She has performed in concert with artists such as Roberta Flack, the Beach Boys, ABBA and Amy Grant.