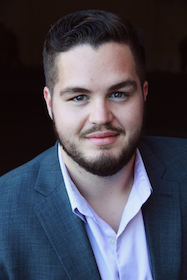 Garrett Torbert, countertenor, serves as Instructor of Voice at the Mississippi State University. Among his teaching experience, he is an active performer in opera, oratorio, and recital. He recently sang the role of Prince Orlofsky in Die Fledermaus and selections from Monteverdi’s L'incoronazione di Poppea with the UA Opera Theatre. He made his professional opera debut with the Mobile opera in Carlisle Floyd’s Susannah and additional roles with Mobile opera include Trin in La Fanciulla del West and Yakuside in Madama Butterfly. In 2017, Mr. Torbert appeared with Red River Lyric Opera in Texas as Oronte in Alcina and returned for his second season this past summer as Rinuccio in Gianni Schicchi. He has appeared in a variety of roles as a member of the University of Alabama Opera Theatre, including Colonel Johnson in the world premiere of Amir Zaheri’s Freedom and Fire! A Civil War Story, Fenton in Die Lustigen Weiber von Windsor, Kaspar in Amahl and the Night Visitors, conducted by Laurie Rogers, Jonathan in Jeremy Gill’s Letters from Quebec to Providence in the Rain, conducted by Caleb Harris, and the celebrant in Mark Adamo’s rarely heard Avow. Other roles include Azael in L’enfant Prodigue, and Zwei Priester in Die Zauberflöte among others, with the UMKC Conservatory of Music and Dance in Kansas City, and he has been a featured soloist with the Kansas City Symphony.

In 2018, Mr. Torbert was a finalist in the Vann Vocal Institute’s Emerging Artist Competition and was a winner of the Alabama Music Teacher’s Association Young Artist Voice Competition. Also in 2018, Mr. Torbert made debuts with the Tuscaloosa Symphony Orchestra under Adam Flatt as Rodolfo in selections from La bohème and Turandot, the Huxford Symphony Orchestra as soloist in the Mozart Requiem, and the Tuscaloosa String Quartet Society as soloist in Handel’s Messiah.

His students have performed with both community and regional theatre companies in the southeast. He is an active member of the National Association of Teachers Singing, the National Opera Association and the College Music Society. He holds a bachelor's degree in music from the University of South Alabama, the Master of Music degree from the UMKC Conservatory of Music and Dance, and recently graduated with a Doctor of Musical Arts degree from the University of Alabama where he was a student of Paul Houghtaling.